i guess we need to prune the lilacs NOW

This year was THE year. Graham fully proclaimed, even before the last snowflake had fallen for the winter season, that nothing was going to stop him from pruning back the lilacs this year. We always had good intentions each fall while working on the rest of the lawn and flower bed winterization, we just never got to it. It’s probable that if we’d used something like the lawn treatment services atlanta to take care of keeping our lawn in top shape that we would have had more time to dedicate to other areas of the garden, like pruning back the lilacs!

It is a good thing that we never got to it each fall; did you know that lilacs should be pruned in the spring right after they have finished blooming? If you wait until the fall, you risk damaging the wood that the blooms will grow on next year {lilacs bloom on old wood}. However, it was NOT good that we did nothing at all..sigh..

At this point, I was adamant that it was beyond our capabilities and that we should hire some professionals. I had found the best local company for tree trimming and was ready to call them but Graham insisted that he wanted to tackle it himself. I wasn’t sure, but I took his word for it.

The “bloomage” of our lilacs was definitely down from where it was last year {it was almost non-existent this year}, so it was imperative that we prune this year if we ever want to enjoy lilacs in the spring again. 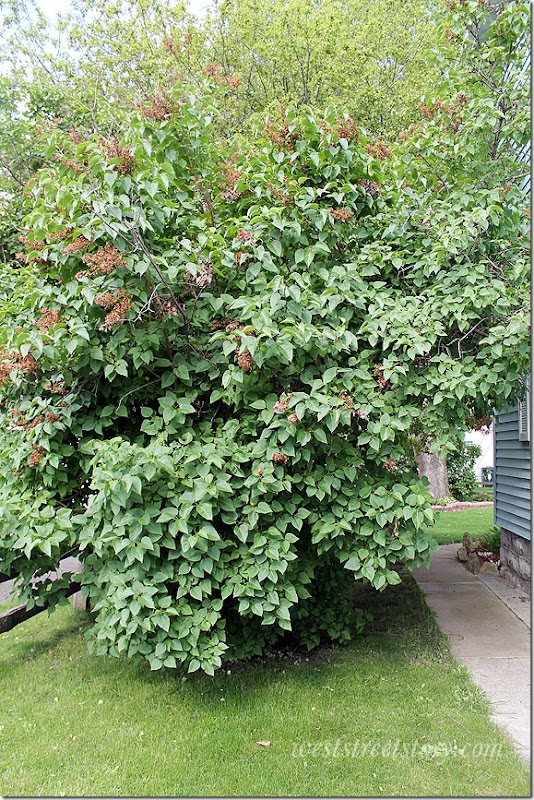 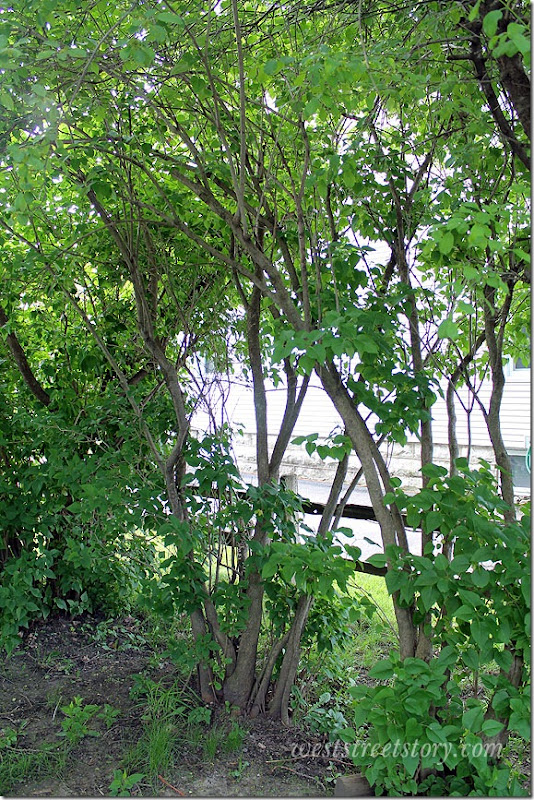 { you can see the branches, from the other two lilacs here actually growing/leaning to the left because they are desperately trying to get some sun -that big monster lilac is just to the left and blocking any rays }

Someone that has kept up with pruning their lilacs could probably get away with the normal pruning procedure. However, given that lilacs are supposed to be at eye-level and ours were at the eye-level of a 20 foot giant {and attacking the side of our house}, we had to take more drastic measures.

We chopped all of our lilacs back as short as possible removing as many old shoots as possible trying to give the new shoots a chance at some sunshine. I know that this sounds very drastic, but we did a lot of research and lilacs are apparently very hardy and should be able to handle this. We nearly hired commercial landscaping to do the job, but figured we could manage it just about by ourselves. 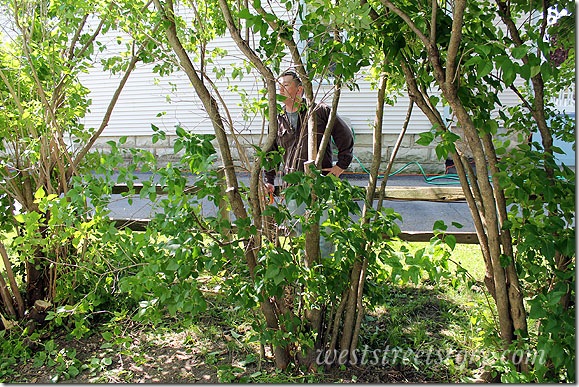 { all three lilacs are already basking in their newly found sunlight } 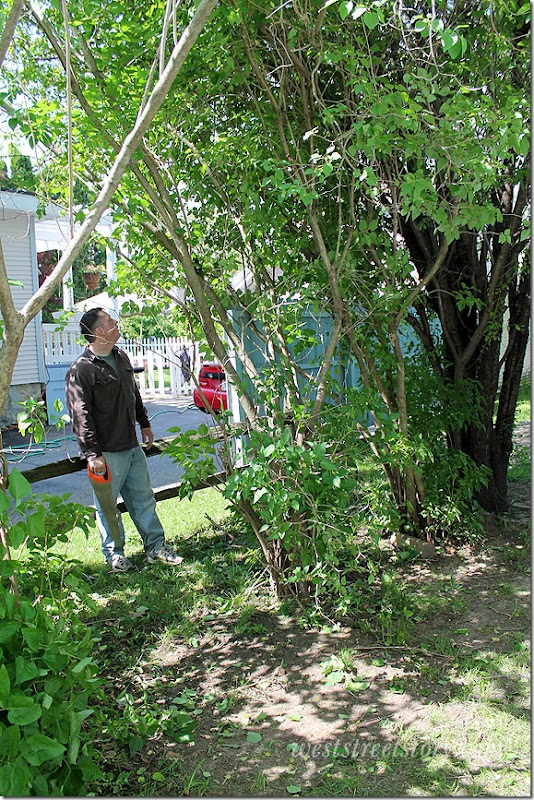 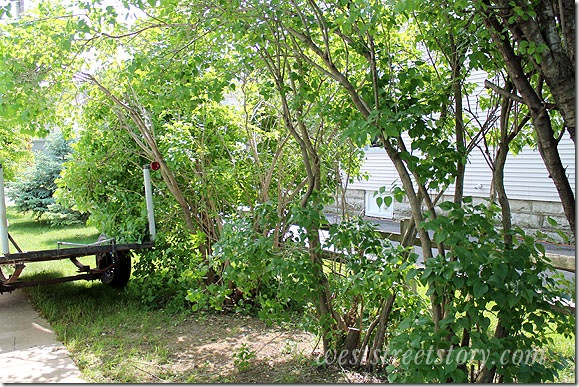 The downside to this is that it will take a couple of years for some of the new shoots to grow back to the appropriate eye-level height {so they will look funny for a bit} and will most likely not bloom for the next couple of years {but that would not be different from this year, really}.

However, the upside is that now there should be less work going forward {as long as we do the upkeep} and the lilacs should grow back just BURSTING with blooms after a couple of regrowth years {instead of PIDDLING with blooms like they did this year}.

Next March/April {before blooming}, because of the drastic pruning approach we took, we will need to select and retain several strong, healthy shoots {to form the shrub framework we would like the lilacs to have} and remove all the others at ground level. We will then cut back the retained shoots to just above a bud to encourage branching {for a fuller look}.

Going forward {and EACH YEAR going forward}, we will need to trim larger stems from the center {to increase ventilation}. We will also want to cut back any small suckers or shoots that are at ground level {unless we are still looking for the lilacs to widen}.

Speaking of having the lilacs widen – when we trimmed the lilacs in the back of the yard, we discovered we only had TWO plants and that they had spread so much it looked like we had three and another one winding around the tree. With things trimmed up, it is obvious we will need to plant something to fill the new space {or take our chances at being able to have these spread, appropriately, unlike what they had been doing}. 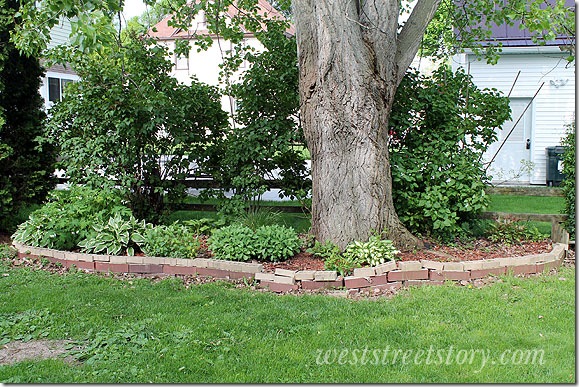 { the before -yes, there are only TWO lilacs growing in the back and starting to sneak around the tree } 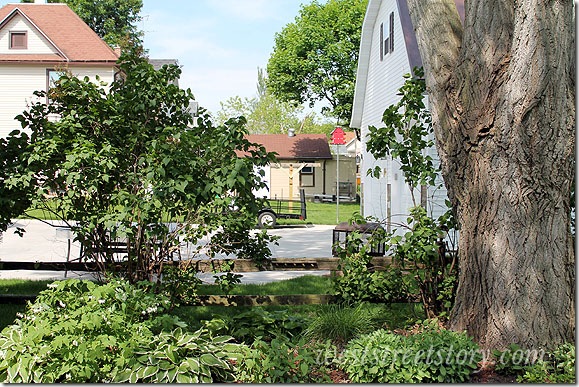 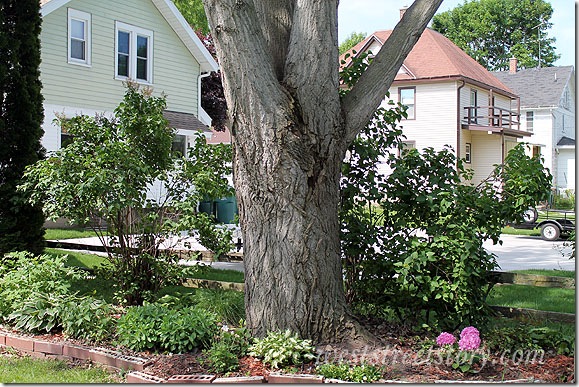 { the trimmed down after – and notice the new hydrangea plant that is now in place – love it! }

Going forward {after next year}, we just need to make sure to cut away any old blooms and trim back any branches that are not keeping with the general shape we would like to keep.

Apparently, the most important thing to remember when pruning your lilacs is to always leave some healthy, new shoots if you are going to be cutting old wood {remember, lilacs bloom on old wood as it take three years for new shoots to actually produce a bloom}.

I have also read that lilacs will do better if there are no weeds or grass growing around the base. So, we also plan to create a little border around each one and put some sort of mulch down. This will also help retain the appropriate amount of moisture for the lilacs.

Hopefully this all works; otherwise we will be replacing some shrubs next spring!

Trimming the lilacs definitely sparked a fire in Graham, however, because he also decided that NOW was the time to trim and prune the other two monster trees in our yard {instead of waiting until fall}.

I was quietly planting annuals in containers {with my back to Graham}, when I turned around and saw this: 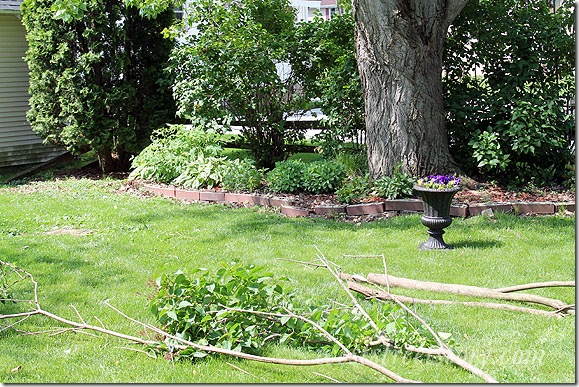 It didn’t catch too much of my attention, as I knew he was pruning a couple big branches from the lilacs. He did catch my attention when I turned around later and saw this: 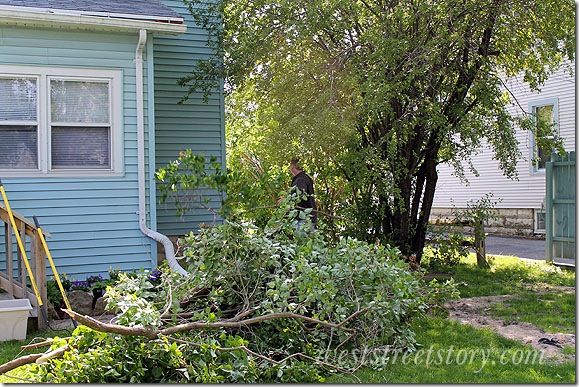 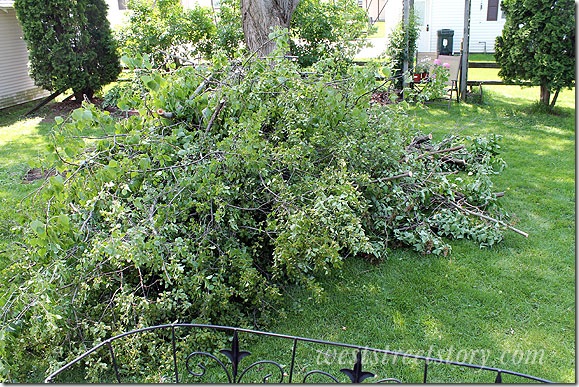 and then when he was doing this: 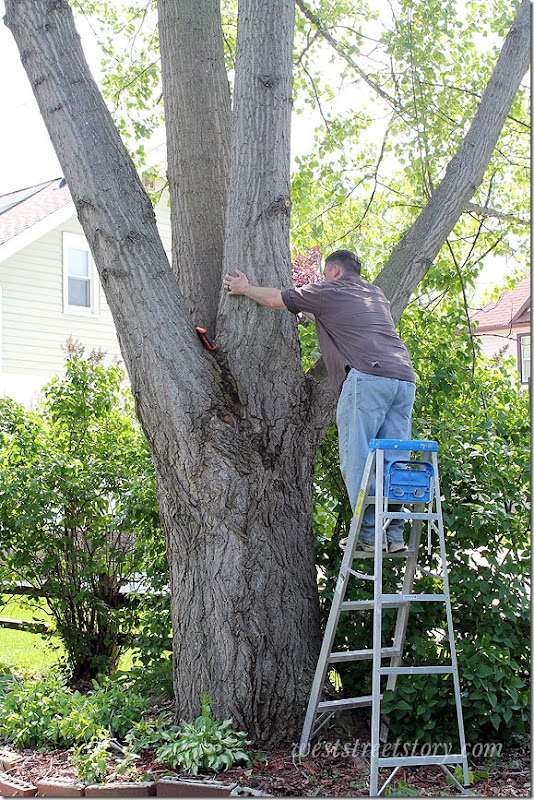 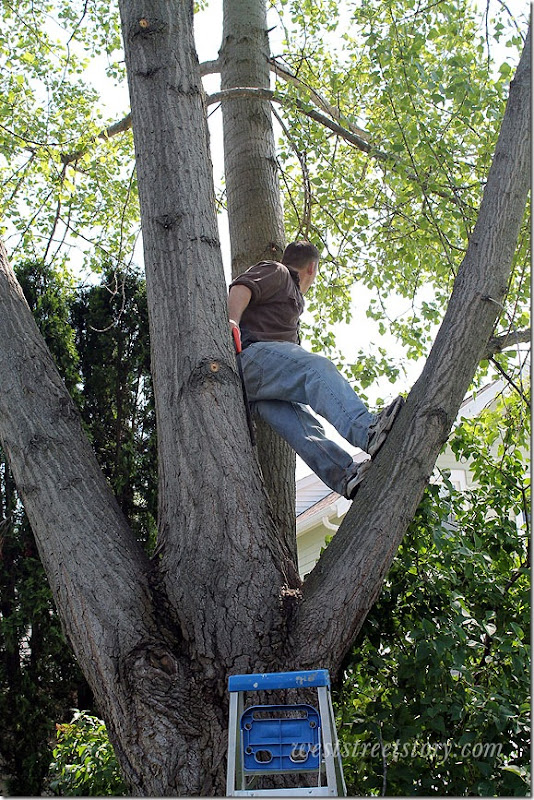 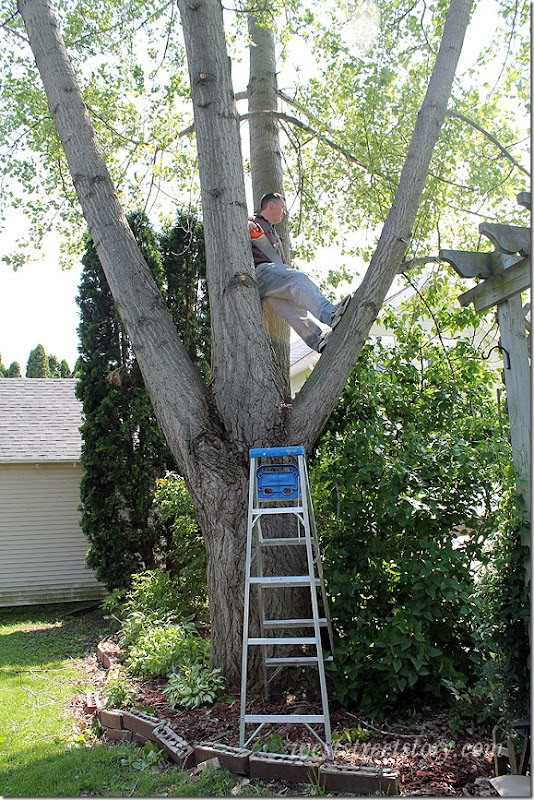 Two trailer loads later, we have a more open looking yard that is actually getting some sunlight now {especially in the afternoon}!

I’m just glad that the tires on the lawn-mover aren’t massive and bulky and they’re more like this 16×6.5-8 tire. Our whole lawn would be very pitifull then! 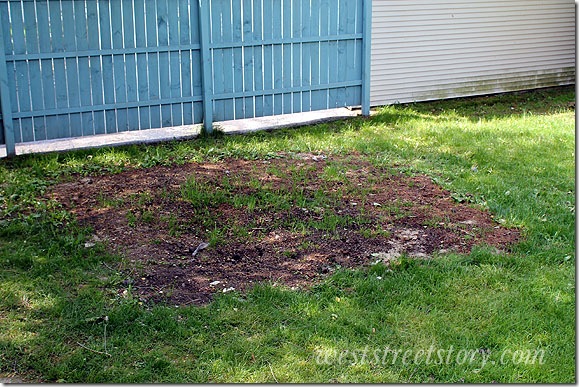