It’s Spring (and that means outside projects!)

Even though we are still busy working on the studio (Graham has moved into the closet, which is the last area that needs drywall), since we had some rather warm weather in Wisconsin, we decided to take care of a couple things outside that have bothered us all winter.

The first one being the mailbox tree. Somehow the previous owners installed, or found a way to have a tree grow around the mailbox. The problem with this tree is that it covers the front door when it has leaves, covers our house number, and we didn’t feel was all that attractive. So, Graham chopped it down! He only broke one saw in the process (hehehe). We couldn’t cut the trunk all the way down to the ground because it was wrapped around the mailbox. However, Jen needs a larger mailbox to mail her business items in. So, when the mailbox gets replaced, the tree will be cut all the way back. 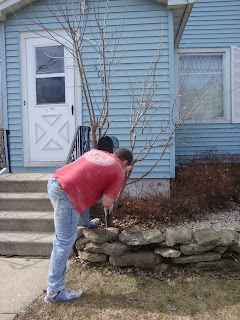 Graham cutting down the mailbox tree (the before) 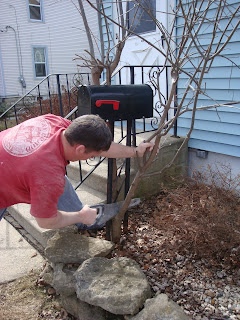 This may have been right before the broken saw 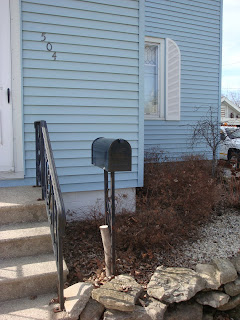 In the upcoming months, we plan on taking inventory of the landscaping plants (as you can see are currently brown in the front of the house) and will eventually be doing a complete overhaul (so if anyone has any Hydrangea bushes they would like to get rid of, let us know — we will also have PLENTY of hosta plants to give away!). We’re awaiting on a few landscape quotes so we have an esitmation of cost to complete the job.

The grass has been looking a bit brown and patchy as well, so that’s something we will need to tend to soon so it’s ready for the summer months. A friend of ours recommended we visit https://www.lawncare.net/ so we may try that in order to get it looking a little greener! The other thing that had been bothering us was the over-powering limbs on the tree in the backyard. Our yard is by no means sunny, but because this tree doesn’t appear to have ever been trimmed, it was causing more shade than we would like. So, Graham cut down the limb (once again only breaking his new saw – that he bought after the mailbox – one time; maybe it is time we invested in a good chainsaw) I think if he’s going to want to try and tackle this tree again we should probably look around for something a little better than some manual saw, perhaps the likes of these electric chainsaws at Workshopedia or similar models could be a better bet, but we’ll continue to look about. 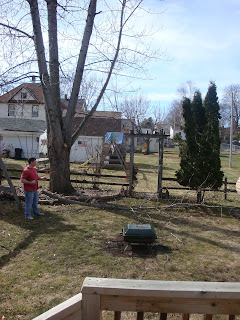 We also started working in the guest bedroom. We do not plan on getting it fully completed until after the studio is done, but we wanted to get it painted and decorated so that it felt inviting for the guests we are hoping to have! Here are just a sneek peek at the color scheme: 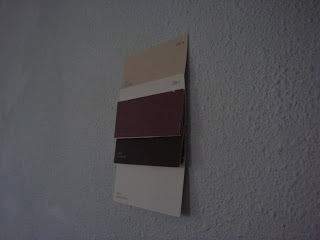 It took a LONG time for Jen to decide on just the perfect hues!

Also, as most of you know, we have a HUGE playset/treehouse/sandbox in our backyard. It’s hard to say just how long they’ve been sat there; it feels like years. There was once a time when they provided our family with a lot of fun and action-packed days, especially the playsets. The hours upon hours that you can have imagining different scenarios and actively playing them out, is something that will live in our memories forever. We definitely had a lot of fun with them once. Unfortunately, we do not currently have a use for it and do not plan on having a use for it for the rest of our lifetime on West Street. If you are willing to come and get it, you can have it for free! The treehouse even has windows, so it would make a great hunting/fishing shack.

« Let There be Walls

There Will Be a Place to Sleep! »